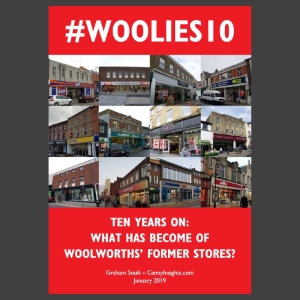 Ten years after Woolworths exited the UK high street, the #Woolies10 research report by CannyInsights.com looks at what its former stores have become.

91% of former Woolworths sites remain in use as shops, exactly 10 years after the iconic retailer disappeared from the British high street.

Gateshead-based retail consultancy CannyInsights.com has spent the last decade tracking and recording new occupants of the 807 Woolworths stores that closed between 27 December 2008 and 6 January 2009[i], following the company’s collapse into administration and the failure of any rescuer to come forward.

The demise of Woolworths resulted in 27,000 people losing their jobs, and 7.2 million square feet of retail sales space – equivalent to 2,500 Tesco Express shops or 63 John Lewis department stores[ii] – becoming available all at once. It brought an end to nearly a century of Woolworths’ presence in the UK, and remains the biggest British retail collapse since the 2007-08 global financial crisis.

Using data most recently updated between October and December 2018, CannyInsights.com’s original “#Woolies10” research reports not only on what the 807 former Woolworths sites are now, but also on the intervening occupants – including former big names like Poundworld and Ethel Austin – that have opened and closed in turn.

Headline findings from the research include:

What does it tell us?

Owner and retail consultant at CannyInsights.com, Graham Soult – who carried out the research, and visited 470 of the 807 ex-Woolworths sites at least once over the last decade – said:

“Amid challenging times for retail right now  – arguably the most challenging since 2008, when Woolworths collapsed into administration – the findings from the #Woolies10 research paint a more positive picture of the high street than many might expect.

“A decade on from Woolworths’ closure, it is remarkable that nine out of ten of its former premises remain in active retail use, as new occupants have arrived to fill the gap left by Woolies, or to offer something new and distinctive to the communities that Woolworths once served.

“The current high level of retail occupancy is especially impressive given the turnover that Woolworths’ former estate has seen to date, with names like 99p Stores, Alworths and Ethel Austin appearing and then disappearing, and new businesses arriving in turn to take their place. Indeed, over a third of former Woolworths sites are already on to their second (or more) post-Woolies occupant.

“Within the ex-Woolworths estate, the dominance of variety retailers like Poundland, B&M and Poundstretcher – all of which offer something not dissimilar to Woolworths – is particularly notable.

“It suggests that Woolworths’ problem was not so much its eclectic range, but a failure to deliver great value to the customer – being neither the cheapest nor the best quality – coupled with onerous leases on properties that Woolworths had, in many cases, formerly built and owned.

“The new generation of variety retailers, like Wilko and Home Bargains, not only have a very clear value proposition that appeals to the savvy consumer, but also tend to benefit from shorter and more attractive lease terms than Woolworths had in its latter days.

“Woolworths not only had an annual rent bill of £125m at the time of its closure, but, in many cases, was tied into leases that were not due to end until the 2020s or beyond.”

Clues to the future

Despite his overall optimism about the high street, Mr Soult, who is also a Fellow of the Institute of Place Management (IPM), believes that the pace of change on the high street will continue to present both opportunities and challenges:

“While still low, the number of currently vacant Woolworths sites is notably higher than when we reviewed these research findings five years ago. Just in 2018, the demise of Poundworld has resulted in a clutch of former Woolworths sites becoming empty again, while Carpetright and The Original Factory Shop are among the post-Woolies occupants that have trimmed some underperforming stores.

“Though some of these sites are already refilled by other retailers – with businesses like Iceland and Poundstretcher seizing the opportunity for expansion – it is likely that the next decade will see more former Woolworths properties being repurposed for functions other than retail.

“To date, less than 6% of the ex-Woolworths estate has been turned over to non-retail uses. However, as town and city centres increasingly look to reinvent themselves as busy, multi-functional places – rather than merely shopping centres – we will likely see more creative re-use that not only makes empty space productive again, but also helps build the vibrant communities needed to sustain the remaining retail offer.

“However, creative and well-run businesses that give customers a good-quality experience, and the products and services they want, will continue to be best placed to navigate the changing high street – just as many occupants of old Woolworths sites are doing now.”

The full research report – #Woolies10 – Ten Years On: What Has Become of Woolworths’ Former Stores? – will be available for free download here at www.cannyinsights.com from Friday 4 January 2019, ahead of the 10th anniversary (on 6 January) of the last Woolworths stores closing their doors.

For media enquiries, or a copy of this press release in Word format, please contact Graham by email, Twitter or LinkedIn.

[i] After Woolworths closed in 2009, CannyInsights.com identified the 807 locations from which the retailer was trading immediately prior to its collapse. Subsequent occupants of these premises have been tracked and logged over the past ten years, using a combination of site visits and detailed desk research. Each location’s status was most recently checked between October and December 2018. The #Woolies10 report includes a detailed account of the methodology employed.

[ii] Based on the 115,000 sq ft sales area of the recently opened Cheltenham branch: http://www.johnlewispartnership.co.uk/media/press/y2015/press-release-9-october-2015-john-lewis-announces-new-store-for-cheltenham.html.

3 thoughts on “Nine out of ten ex-Woolworths sites remain in active retail use, a decade after closure”

This site uses Akismet to reduce spam. Learn how your comment data is processed.

I'm surprised it hasn't been more heralded - as it

Great, as always, to chat to Clive Bull on LBC thi

The folks at @midulstercouncil asked us to do a pr

Time for a hearty lunch at Lou's at St Cuthbert's

With no-one else but us on the beach, it was too t

"#Retail will be increasingly about those independ

"What we've seen over the last few days is big ret